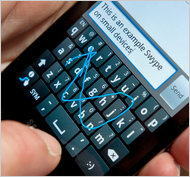 Recently, I watched a commercial with a young man and a phone. The voice over saying that he had just crushed the world record for most words texted in a minute. His weapon of choice was the Swype Virtual Keyboard.

This keyboard is still a QWERTY keyboard and therefore has all the keys that any other mobile touch screen phone would have.  The one thing that is different is that by dragging your finger/thumb over the virtual keyboard, it uses predictive software to organize the corners of that seemingly jumble-of-characters into the words you’re likely to mean. We’ve seen that predictive capability before – it’s on the iPhone and in various forms in the texting app of late-model feature phones.

This dragging is to compensate for not being able to “feel” the buttons, since for phones with full keyboards like the BlackBerry, you can type by feel and memory which is just like how most people type on a typical keyboard for a computer. Swype is available on phones that all four of the major carriers have, so popularity of this app is already assured.

This latest technology reminds me of the time before text messages when busy professionals had Palm pilots and PDAs. The state-of-the-art Graffiti and Graffiti 2 were the top dogs. Graffiti worked by drawing a single shape with the stylus that uniquely corresponded to a particular letter or symbol.  The main focus here was that you would learn this third alphabet, just like you did in elementary school with the print character set and then in third grade, cursive. This short hand language was soon forgotten just from the lack of interest in PDAs, since smaller, sleeker, and more useful cellphones became the next big thing.

Interesting enough, we did go backwards to the 1abc, 2def, 3ghi system. BlackBerry brought out the first miniature keyboard, in the terms of cellphones. Graffiti might have been before it’s time.

This Swype method might follow the same fate of Graffiti or of the Dvorak keyboard.  The time and efficiency lost when learning a new keyboarding method might not outweigh the benefits.