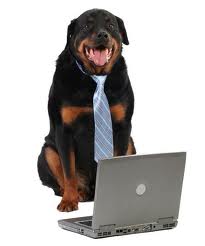 Does the presence of a canine make people collaborate more effectively?

This is the question researchers at Central Michigan University studied in an advertising development experiment. A dozen groups of four persons were asked to build a 15-second advertisement. Although everyone was asked to contribute ideas, the groups had to choose one. Half of the groups had a dog present during the brainstorming meetings, while half had no access to an animal.

Effectiveness of collaboration was measured in a survey at the end of the experience. On measures of trust, team cohesion and intimacy, those groups with dogs ranked their interactions with other team members higher than those groups without dogs.

I found The Economist report of this result very interesting. I’ve known that dog-friendly employers also had bean bag chairs, fussball tables, all-you-can-drink soda policies and lots of natural sunlight were stereotypical of west coast Internet companies, or at least of Internet companies, but I didn’t appreciate the effect of dog-friendly policies on employee attitude to teamwork.

Now, if only we could teach Rover to write software, we’d really be making progress!