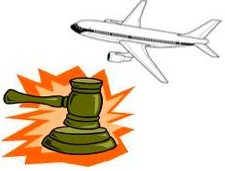 Business travel is going to get even more painful and less reliable thanks to the Obama administration’s continued implementation of command economics.

Sitting in a packed airport terminal can be a stressful for a traveler that needs to be somewhere other than this place. For others, it can be a money making opportunity according to an article, Auctions for Overbooking in the Wall Street Journal from June 8, 2010.

Background: The government is instituting a payment that airlines must pay for customers that are being bumped involuntarily from overbooked flights: from $400 to $600 and for extended delays, $800 to $1,300. This is a substantial and unjustified increase. It is bound to wake up the airlines for a better solution or further reduce profit from an already anemic industry.

This increase is bad news for business travelers.  Since they fly more frequently, they naturally will fall victim to getting bumped more often.  Although they will get more money for getting bumped, this process will interfere in their ability to do their job – the reason why they are traveling in the first place. So, for business travelers who’s livelihood depends on getting to the meeting or conference by a certain time and booked that flight for specific time management reasons, this government action will actually reduce productivity and increase volatility in the pace of doing busiiness.  That compensation will only sightly help them feel better.  It does nothing to heal the wounds of customer creditability, or add a degree of reliability in business dealings.

Also, with the business travelers getting paid for being bumped increasing to more than 50%, problems of who gets and who should get the actual money comes up. With a heavy traveler or commuter flying for example, one hundred times a year, statistically he/she will likely get bumped about 10% of the time since this is the rate by which airlines tend to overbook their flights to account for those not making their flight – to be sure the plane leaves the gate full up.  That would mean, he/she gets bumped 10 times a year.  With these new policies, that would be at least $6,000 for the traveler. Some serious change.

The business paid for the flight for the employee.  It is only right for them to receive any profits from that action, especially since that employee is hurting the company for missing work and appointments and spending too much time in a city they’re leaving.  The issue of taxes is also going to come up.  For our sample business traveler, no doubt the IRS will make sure that the traveler is going to have to pay taxes on that income that was forced on him, since the frequency and amount of the fees promotion from mere voluntary and periodic pocket change.

Years ago, Julian Simon, the economist and author of Ultimate Resource II proposed an ingenious solution that would help the airlines and the passengers solve this common problem.  It was to hold an auction with the potential passengers booked and ready to board the plane. The auction would determine who would like to get bumped and would increase the amount they would get as compensation, until the number of volunteers equals the number without seats on the aircraft. American Airlines has implemented this initiative to brilliant effect.