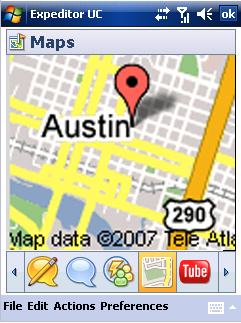 In mid-September there are normally many interesting displays at the Museum of Natural History in New York. A few were available only to IBM invited customers and analysts. Of course, Mike Rhodin made much of the pun of instead of having Lotus Sphere, we were participating in Lotus under the Sphere (of the Planetarium). Great venue though, although a little expensive from the financial district, but hey, I almost got into the 'Cash Cab' or one that looked like it and mid-September is a great time to be tooling around NYC.

My favorite display was the 'Lotus Expediter for mobile' exhibit. Here, Michael Masterson showed me Sametime and Connections together in a mashup using Google Maps (screen shot mockup on the left) on a Windows Mobile device. Expediter and the Eclipse framework are Lotus' push into the new paradigm of composite applications.

With only a few lines of code, the availability of location-sensitive information makes user realtime navigation an accessible solution. Michael made it clear that this was not a product demonstration. Instead, it was a technology demonstration showing what the Expediter could do for extending the functionality of Sametime onto mobile devices. Granted, the navigation service is really, really cool, I found the IM and Presence capabilities useful for business.

In fact other research that I have done in 2006 shows just how useful mobile IM is to business users.

Michael did make it clear that the goal was to show the power of the Eclipse framework and Expediter environment at enabling new kinds of composite applications for mobile users and mobile devices.

Of course, I asked 'works on iPhone?' and got the standard – it's not an enterprise platform – story. [See letter to FMC companies.] But, I understand that it's running on Nokia E-series and N-series devices, which are both [[Symbian]] platforms.